You are here: Home / Club / SLSG Select Girls Open On a Positive Note

St Louis Scott Gallagher’s latest product was introduced to the market on Thursday evening. The SLSG Select, as the High School age girls team that haven chosen a 10 month Club career, hosted the UMSL Tritons at the Soccer Park.

It was a nervous start for the team as Louisville-bound Paige Brown saw her poor distribution pass get picked off by freshman Kali Thomas (Summit) who buried it over a diving Brown before the clock had reached 2 minutes elapsed. It didn’t take long for SLSG to settle down however as they faced an UMSL team only a couple years older, with jr Brittany Harbaugh (St Joe) in the defensive midfield the only upperclassman besides Kaitlyn Smugala (Parkway South) in goal for the Tritons.

With 9 Division 1 prospects on the roster (Update – Tara Sullivan tells me she has committed to Ole Miss), it was probably only a question of time before this group would find their footing and that was the case. With Courtney Kaplan and Danielle Tolmais managing service, the Select girls utilized their speed on the wings to open things up and created opportunities. As it was, it fell to freshman Emma Farley to get the first goal for the squad when she picked up a ball in the center circle and belying her youth, went straight at the defense. She found Adalie Schmidt outside the box and moved off to the right. Schmidt’s return pass sent Farley into the box and her shot to the near post somehow found space to squirt by Smugala, tying the game in the 42nd. 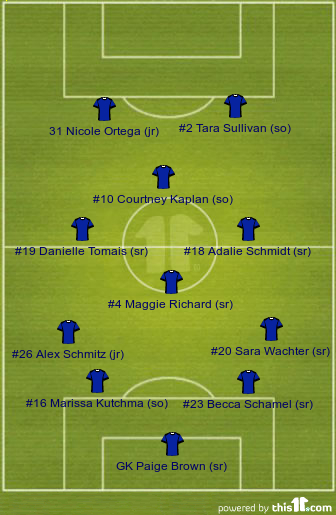 Schmidt got the game-winner in the 68th minute, finishing from 8 yards after a corner kick. The initial opportunity was pushed to the far side but picked up by sophomore Lauryn Gamache (IWA) who took a touch and then put a square ball into play that Schmidt one-timed. It had been preceded by a ball off the upright as jr Nicole Ortega (Springfield) held off a defender on a run into the box.

The Tritons injected some fresh legs in the final 15 minutes and began to move the ball more effectively against SLSG’s defense but were unable to equalize. A very positive start for SLSG. Roster, schedule and game photos below.