You are here: Home / Club / SLSG U18 Open US Soccer Academy Finals Sunday

I’ve written about a lot of title games in the past month – High School, Missouri State Cup, National Cup XII, Super Y League and underway now the ECNL with National Premier League (NPL) and USYSA upcoming. Quality competitions all but within the Club sphere there are two, possibly three, that to my mind offer true National titles. The US Soccer Development Academy is one of them.

The St Louis Scott Gallagher U-17/18 squad begins Group Play today in Houston as they pursue the US Soccer Development Academy (USSDA) National title that just eluded them last year in an 0-1 loss to the New York Red Bull Academy team in the U-15/16 age group. As I wrote a few weeks ago, the U17/18 squad includes 11 players who were on the pitch for that Title game last year (also seen here, stolen without attribution by Ken Godat, owner of the BB)

They advanced to Finals Week by winning their group (one of eight) during the Academy Playoffs in June. They will face a similar challenge this week as the eight group winners, now placed into two groups of four, will play three games for the opportunity to reach the National Title game on Saturday July 20th at BBVA Compass Stadium again.

SCHEDULE/RESULTS
Sunday July 14 1-3 LOSS to De Anza Force U-17/18 vs St. Louis Scott Gallagher Missouri U-17/18
A goal in the 2nd minute by Zach Kavanaugh from Austin Panchot offered a positive start as the boys controlled play the first 20 minutes. De Anza didn’t break however and tied the score midway through the half against the run of play. A ball deep in the right corner was sent back into the box, skipped through and controlled just beyond the far post about 12 yards out before being slotted home before the defense could catch up with it. The game-winner came five minutes later and was scored on a corner kick that was headed home easily from the edge of the six yard box as there appeared to be some confusion on the part of the defense. There were opportunities tonight but none of the shots were struck particularly well. The final goal was scored via a corner, a driven ball that was redirected from just beyond the far post as it dipped down into the stride of the goal scorer.

Not the game the boys expected of themselves. They’ll now face Shattuck St Mary on Tuesday, who were 3-2 winners as they came back against the New England Revolution.

De Anza won 2-1 when they played SLSG on December 3rd during a weekend non-Conference event. SLSG gave up goals in the 2nd and 90th minute in the loss while getting a goal from Thomas Russo in the 53rd.

Tuesday July 16 0-3 LOSS – St. Louis Scott Gallagher Missouri U-17/18 vs Shattuck-Saint Mary’s Soccer Academy U-17/18
Ricardo Lopez-Espin tallied a brace in the second half and Michael Bajza scored a penalty kick in the 57th minute to give Shattuck a 2-0 lead. – See more at US Soccer

Shattuck-St Mary’s was the Conference winner and beat SLSG 3-1 on May 11th in Minnesota. SSM scored in the 22nd before Tommy Barlow tied the game in the 66th, only to see the winner scored in the 70th. The two teams also met June 14th in Rockford IL where a scoreless draw earned SLSG the final point they needed to reach the Wildcard spot.

Thursday July 18 8:30 pm – New England Revolution U-17/18 vs St. Louis Scott Gallagher Missouri U-17/18
The two teams have not played each other this year

The team will open play today with Nathaniel Davis (Lafayette) in goal. Nate, who started five games this season for the team, steps in for normal starter Jacob Leeker (25 starts) who broke his foot on Saturday, in Houston, where the team was preparing for today’s opening match.

I forgot how much of a workout being on crutches is

One of the factors I appreciate about the Academy is that Coaches are required to play each rostered player a certain number of minutes. A player who commits to the Academy will receive playing time. That holds true for Nate who started 5 games but saw many more minutes then might otherwise be indicated by that number (Leeker had 25 starts). The team will have an experienced player between the pipes and I have had conversations with the coaches in the past twelve months that point to a high level of confidence in Nate.

The team will play in what Head Coach Tim Regan, who joined the Club as Academy Director last year after working for US Soccer, calls a modified 4-3-3. I see a 4-2-3-1 that has plenty of fluidity to it and an attack that woke up in the final six weeks of the season to help them grab one of the five final wildcard spots (of 13). It was an attack bolstered by the addition of Mark Segbers and Austin Panchot from the U15-/16 squad. Here’s the first game lineup. 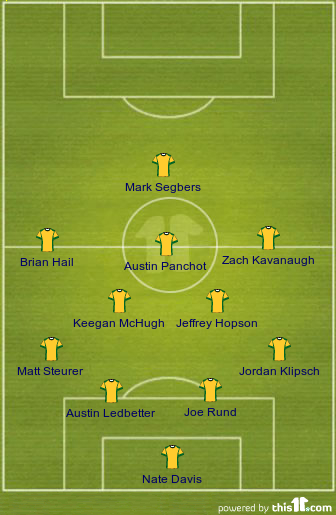 SLSG and De Anza are the only teams that advanced to the U18 Finals Week via the Playoffs. TopDrawerSoccer.com offered this recent preview.